The City of El Centro City Council took action at the regular Council meeting of November 1, 2022 to approve three contracts appointing Joseph Bernal as the new Fire Chief, Angel Hernandez as the new Community Development Director, and Robert Sawyer as the new Chief of Police.

“Joseph Bernal, Angel Hernandez, and Robert Sawyer are extremely hardworking individuals that bring a wealth of experience to their respective departments.  I am confident in their dedication to public service, and their success will mean a better quality of life for the residents of El Centro.  The Council is pleased that we have a successful succession plan to promote within,” stated Mayor Tomas Oliva.

Joseph Bernal, born in El Centro, but spent his youth living in Mississauga, Ontario, Canada.  Mr. Bernal relocated back to El Centro in the fall of 1991. He graduated from Central Union High School, then graduated from Mount San Antonio College 28th Basic Fire Academy in November of 2000, where he obtained his Associates Degree in Fire Technology.  He continued his education and graduated from the Imperial Valley College Paramedic Program in 2005, where he finished top of his class.  He received his Bachelors of Science Degree in Fire and Emergency Management in 2014.

Mr. Bernal began his career as a Firefighter with the El Centro Fire Department in August of 2001. He was promoted to Fire Engineer in 2007, and to Fire Captain in 2014.  He then served as Acting Battalion Chief in 2019, and was officially promoted in May 2020. “I would not be in the position I find myself in today without the dedication and commitment of past and present El Centro Fire Department members who helped shape me into the person I am today.  My goal as Fire Chief is to lead a progressive, forward-thinking department that is in touch with the needs and expectations of the community we serve,” states Bernal.

Angel Hernandez is a graduate of Southwest High School.  He has a Bachelor’s Degree in Public Administration from San Diego State University and a Master’s Degree in Organizational Leadership from Northern Arizona University.  He holds a membership as a Certified Planner with the American Institute of Certified Planners and served on the board of the San Diego Section of the American Planning Association.  Mr. Hernandez volunteered as a Planning Intern in 2010 at the City of El Centro.  In 2014, he began his actual career at the City of El Centro when he was hired as an Assistant Planner.  He then promoted to Associate Planner in July 2018.  Mr. Hernandez is a certified city planner with over a decade of experience in current planning, project management, and grant writing.  He has served as the interim Director of the Community Development Department since January 2022.

During his eight years of service with the City of El Centro, Mr. Hernandez holds a variety of duties and responsibilities.  This includes the development review of private projects, ranging from single-family residential additions to 50-acre subdivision projects.  Mr. Hernandez has also managed planning projects for the City, including the El Centro Active Transportation and Safe Routes to School Plan, El Centro 2040 General Plan, and most recently the 2021-2029 Housing Element.  He is also proud of managing the preparation of grant applications with his colleagues that have secured over $1 million to fund the construction pedestrian improvements and the upcoming Imperial Avenue Complete Streets Plan.  “What I enjoy the most working for the City of El Centro, is the collaboration across departments, professional disciplines, and elected officials that we employ to meet the City’s goals,” Mr. Hernandez said, “This is a practice that I will continue to embrace and encourage as Director of Community Development.”

“I am honored to be appointed Director of Community Development, and continue my service to the community I was raised in, attended school, and where my family and friends continue to call home,” said Mr. Hernandez.  “With this new responsibility, I look forward to working with the department staff in efficaciously meet the needs of the public and ensure that residents are proud to call El Centro home.”  As Director of Community Development, Mr. Hernandez will oversee the Building and Safety, Code Enforcement, and Planning and Zoning Divisions.

With respects to Chief Robert Sawyer, a native of El Centro, a graduate of Central Union High School, and a proud husband and father, started his career with the El Centro Police Department as a patrol officer in 1998 after serving as a reserve police officer.  As a police officer, he worked patrol, served as a field-training officer, was a part of the department’s range training team, was a member of the SWAT team, and worked as a task force officer with the Drug Enforcement Administration.  He was promoted to Sergeant in 2010, where he worked patrol and enjoyed mentoring young officers.  In 2015, Robert Sawyer earned his Bachelor of Science in Administration of Justice from Coastal California University. He was promoted to Commander, where he had an opportunity to work with all divisions within the department.

In 2018 Robert was hired as the Chief of Police in Brawley, California, serving two years in that role before returning to the El Centro Police Department as the Deputy Chief of Police in 2020. Robert has served in this role for the past two years overseeing both operations and administration.  “I am honored by City Manager, Marcela Piedra, and our City Council’s confidence to be selected as the Chief of Police.  It is my privilege to work alongside the men and women of the El Centro Police Department and to serve our community with dignity and pride,” states Sawyer.

“The recruitment process for the Fire Chief, Director of Community Development, and Chief of Police was highly competitive and it gives me tremendous joy to have selected Fire Chief Joseph Bernal, Angel Hernandez as the City’s Director of Community Development, and Chief of Police Robert Sawyer.  They not only have the best interest of the El Centro community in mind, but their employees as well.  They are committed and dedicated to public service and will do an outstanding job in their new roles,” stated Marcela Piedra, City Manager. 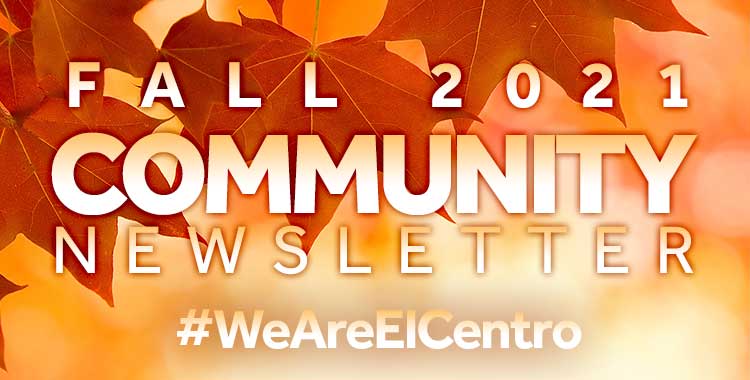